By Ken Bredemeier | VOA News on Jan 13, 2021Comments Off on US House Impeaches Trump for Inciting Deadly Capitol Riot 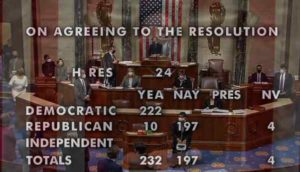 WASHINGTON – The U.S. House of Representatives impeached President Donald Trump on Wednesday, declaring that he incited insurrection last week when he implored thousands of his supporters to march to the Capitol to try to overturn his reelection loss, prompting a mob demonstration that turned into deadly mayhem.

The 232-197 majority for impeachment, with just a week remaining in Trump’s four-year term as the U.S. leader, was made up of Democratic Party lawmakers joined by 10 of Trump’s fellow Republicans.

The House vote made Trump the first of the country’s 45 presidents in its 245-year history to be impeached twice.

He was acquitted by the Senate a year ago in the first impeachment case and now will face a new trial in the weeks after President-elect Joe Biden is inaugurated next Wednesday. A two-thirds vote in the politically divided Senate would be needed to convict him. If convicted, a simple-majority vote could bar him from holding federal office again.

“There is simply no chance that a fair or serious trial could conclude before President-elect Biden is sworn in next week,” the Kentucky Republican said in a statement. “Even if the Senate process were to begin this week and move promptly, no final verdict would be reached until after President Trump had left office.”

Senate Minority Leader Chuck Schumer said a trial could begin this week or next.

“But make no mistake, there will be an impeachment trial in the United States Senate. There will be a vote on convicting the president for high crimes and misdemeanors,” he said.

Schumer is set to become majority leader when Biden is inaugurated.

For his part, Trump released a video late Wednesday in which he made no mention of the impeachment but condemned the assault on the U.S. Capitol and pleaded for calm.

“I unequivocally condemn the violence that we saw last week. Violence and vandalism have absolutely no place in our country and no place in our movement,” Trump said. “Making America great again has always been about defending the rule of law.”

The House impeachment vote came a week to the day after rioters stormed past overwhelmed police into the U.S. Capitol, the worldwide symbol of American democracy, during the congressional certification of the Electoral College vote showing that Biden had defeated Trump in the November election.

The throng of Trump supporters stormed into some congressional offices and ransacked them, littered the floors with government documents and scuffled with police. Five people were left dead, with three protesters dying from medical emergencies, another fatally shot by police, and a police officer killed in what authorities are investigating as a homicide.

As Wednesday’s impeachment debate started, House Speaker Nancy Pelosi, the top Democrat in the chamber, called Trump a threat to “liberty, self-government and the rule of law.”

But a staunch Trump supporter, Representative Jim Jordan of Ohio, said impeachment “doesn’t unite the country. This is about politics.” Democrats, he said, “want to cancel the president.”

The thin Democratic majority in the House had enough votes on its own to impeach Trump a week before his term ends at noon on January 20 and Biden, a Washington political figure for nearly 50 years, is inaugurated as the country’s new leader.

But 10 Republicans, including Representative Liz Cheney of Wyoming, the party’s third-ranking House member, joined opposition Democrats in impeaching Trump. In announcing her vote for impeachment Tuesday night, she said there “has never been a greater betrayal” by a U.S. president.

The House, with no Republican votes, impeached Trump in late 2019 for trying to get Ukraine to dig up negative information on Biden ahead of the November election. But he was acquitted in February after a 20-day Senate trial.

Biden won the presidency in a decisive Electoral College vote that is determinative in U.S. presidential elections. Congress last Thursday certified the Electoral College outcome, but not before the pro-Trump mob delayed the certification for hours before authorities restored order.

As the House debated the ground rules for the impeachment proceeding, Democratic Representative Jim McGovern of Massachusetts, “We wouldn’t be here if it weren’t for the president of the United States,” adding that “the cause of this violence resides at 1600 Pennsylvania Avenue,” the White House address.

At a rally a week ago, Trump urged his supporters to march to the Capitol and “fight” to overturn his election loss.

House Majority Leader Steny Hoyer of Maryland said Trump had “brought shame and disorder to the presidency” and had “weaponized hate.”

But Representative Tom Cole, an Oklahoma Republican, opposed Trump’s impeachment, saying, “I can think of nothing that would cause further division more than the path the majority is now taking. Rather than looking ahead to a new administration, the majority is again seeking to settle scores against the old one.”

No GOP pressure on vote

House Republican leader Kevin McCarthy of California, a close Trump ally, said, “Impeachment at this time would have the opposite effect of bringing our country together.” But the Republican leadership said it would not try to pressure party members to vote against impeachment.

The impeachment resolution cites Trump’s unfounded accusations that he was cheated out of a second term by voting and vote-counting irregularities; his pressure on election officials in the Southern state of Georgia to “find” him more than 11,000 votes to overtake Biden’s margin of victory in the state; and his statements at a rally last Wednesday urging thousands of supporters to march to the Capitol to pressure lawmakers to overturn the election outcome.

Biden said it was his “hope and expectation” that the Senate could simultaneously hold an impeachment trial and confirm his Cabinet appointments after he takes office, while also approving more aid for the U.S. economy that has been weakened by the coronavirus pandemic.

“It is critically important that there’ll be a real serious focus on holding those folks who engaged in sedition and threatening lives, defacing public property, caused great damage — that they be held accountable,” he said Monday of the rioters.

Dozens of rioters already have been arrested, and federal authorities are investigating many more, scouring security videos at the Capitol to identify wrongdoers and searching social media videos the rioters posted of themselves in the building.