By Alutiiq Museum on Apr 10, 2022Comments Off on Filipino-Alutiiq Word of the Week-April 10 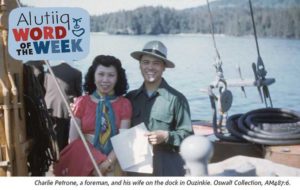 People of Filipino heritage have been part of Alaska history for over two hundred and thirty years. The first record of a Filipino person in Alaska is from 1788, when a man from Manilla served Captain William Douglas aboard the Iphegenia Nubiana. This 200 ton British ship sailed from Zamboanga in the Philippines to the Gulf of Alaska to trade for furs. It was the first of a number of fur-trading expeditions that included Filipino seamen and linked the Philippines to Alaskan trade.

In the nineteenth and twentieth centuries, Filipino workers participated in many of Alaska’s major industries. They mined gold, laid communication cable on the seafloor, served in the military, and worked in the seafood processing industry. Sometimes called Alaskeros, Filipino cannery workers began arriving in Kodiak at the turn of the twentieth century, replacing Chinese immigrants whose numbers were restricted by federal immigration laws. From 1898 to 1946, the Philippines were an American territory. This made immigration easier, and the allure of better wages brought workers to America.

On Kodiak Filipino workers were recruited in the Philippines and in western states for cannery labor. Like Alutiiq workers, Filipino laborers were segregated from other ethnicities and paid low wages. They had their own foremen, mess halls, and bunk houses. Some worked seasonally, returning home each fall. Others stayed in Kodiak between fishing seasons, married, and raised families. Filipino people are listed as Kodiak residents in the 1910 census, and today Alutiiq families include people of Filipino descent.